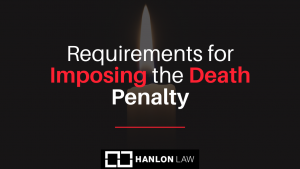 The most severe punishment a criminal defendant may face in Florida is the death penalty. Recent changes in Florida law, though, make it more difficult for a criminal defendant to be sentenced to death. In a recent Florida case in which the defendant was charged with murder, the court discussed the status of the current and past requirements for sentencing a defendant to the death penalty. If you are charged with murder or another violent offense, it is in your best interest to engage an aggressive Tampa violent crime defense attorney to develop a strategy for fighting to protect your rights.

It is reported that the defendant broke into a home in 1984, assaulted a teenage girl that was babysitting in the home, and stabbed her to death. Five days later, he murdered another victim in a substantially similar matter. He was found guilty of first-degree murder and sentenced to death for each crime. Due to recent changes in the law, the defendant filed a motion to vacate his sentences on the grounds they were unlawful. The trial court denied the motion. The defendant then filed an appeal. Upon review, the appellate court affirmed the trial court ruling.

With regard to the sentence for the second crime, the court found that it was lawful under the sentencing scheme in effect at the time, and case law held that the intervening change in the law was not to be applied retroactively. As such, that sentence was affirmed. Regarding the second sentence, which due to appeals, was imposed much later, the court noted that the Supreme Court of Florida found the prior sentencing scheme to be unconstitutional because it allowed the judge issuing a sentence to find that an aggravating circumstance existed, which is necessary for the imposition of a death sentence, without a jury’s determination of fact.

The court went on to explain that pursuant to the law, a jury must find the aggravating circumstance that renders the defendant eligible for the death penalty. The court stated, however, that in a capital sentencing proceeding, a jury is not required to weigh the mitigating and aggravating circumstances. Further, a jury is not obligated to make the ultimate decision regarding what sentence, within the applicable range, should be imposed on the defendant.

Finally, the court explained that the requirement that a judge, rather than a jury, find the existence of aggravated circumstances is required by the Sixth Amendment. As such, the lower court ruling was affirmed.

Confer with a Zealous Tampa Attorney

Murder and other serious crimes carry significant penalties. If you are a resident of Tampa and are currently accused of murder or another grave offense, it is prudent to confer with an attorney to evaluate your potential defenses. William Hanlon of Hanlon Law is a zealous Tampa violent crime defense attorney with the skills and resources needed to help you pursue a favorable result and he will advocate aggressively in your favor. You can contact Mr. Hanlon through the form online or at 813-228-7095 to set up a conference.

Does it help me to be cooperative with the police?

No. If you’re the suspect in an investigation, nothing you offer to law enforcement is ultimately going to help your case or prevent you from getting formally charged. It can only hurt you. Before speaking to the police, it is always important to consult with an experienced criminal attorney. Many times what you tell the police officer does not end up in his report. You should remember that every law enforcement officer has an agenda, and what actually ends up in their report is often an interpretation of what you tell them. Many times that interpretation is used by the law enforcement officer to support their decision to arrest you.