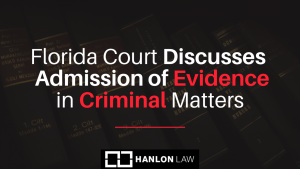 In many criminal cases, the State lacks direct evidence that the defendant committed a crime. Thus, in such instances, the State will rely on circumstantial evidence to build a case against the defendant. While circumstantial evidence is generally admissible, it must bear a connection to either the defendant or the charged offense, and irrelevant evidence that is improperly admitted may lead the jury to issue an unjust verdict. This was shown in a recent Florida case in which the defendant was convicted of multiple crimes due to a glove found in his sister’s van several days after the alleged criminal acts. If you are charged with a crime, it is important to know your rights, and you should speak with a knowledgeable Tampa criminal defense attorney as soon as possible.

The Alleged Crime and Trial

It is reported that two men broke into the home of the victim, held her at gunpoint, and ransacked her house. The victim was then struck in the head with a gun and shot. After the perpetrators left, she went to a nearby salon and called 911. During the course of the investigation of the crime, the defendant was named as a suspect, and the victim identified the defendant as the man who shot her. He was then charged with attempted second-degree murder and numerous other offenses.

Reportedly, there was no direct evidence linking the defendant to the crime. Prior to trial, the defendant moved to suppress evidence of a glove that was found in a van owned by his sister, which was one of the only pieces of evidence that could potentially implicate him. The court denied the motion, and the defendant was found guilty on all charges. He then appealed, arguing in part that the trial court erred in denying his motion to suppress.

Determining if Evidence is Admissible

Under Florida law, any evidence that tends to prove or disprove a material fact will be deemed relevant. While evidence must be relevant to be admissible, relevant evidence may be precluded if the court finds that the dangers of unfair prejudice to the defendant, misleading the jury, and confusing the issues greatly outweighs the probative value of the evidence. Further, the Florida courts have ruled that evidence that bears no connection to the defendant or to the alleged crime is too prejudicial to be admissible.

Speak to a Proficient Tampa Attorney Regarding Your Charges

The State is limited as to what evidence it may produce at trial, in that it cannot introduce evidence that is prejudicial and irrelevant. If you are charged with a crime, it is important to speak to an attorney regarding what evidence may be used against you. William Hanlon of Hanlon Law is a proficient Tampa criminal defense attorney with the skills and experience needed to help you fight to protect your rights. You can reach Mr. Hanlon by calling 813-228-7095 or by using the form online to set up a conference.

Does having a local lawyer matter?

Yes. It does matter. Many people feel that a local criminal lawyer will have a deeper relationship with the local prosecutors and local judges. When you’ve spent years practicing within a particular jurisdiction, you earn a certain level of credibility with them. That credibility can play a role in the ultimate resolution of your case.

When should I retain a criminal defense attorney?

Have I been charged with a crime if a police office has arrested me?