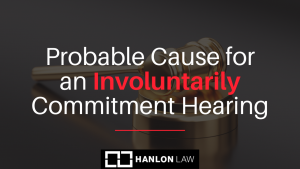 In many instances, a person convicted of a sex crime in Florida may be involuntarily committed pursuant to the Jimmy Ryce Act (the Act). Individuals committed under the Act are subject to a yearly review of their status, though, to determine if there is evidence demonstrating that their condition has changed so that they no longer present a threat to society and can safely be released. In a recent case in which the defendant was involuntarily committed following a conviction for attempted sexual battery, a Florida court discussed what constitutes probable cause to warrant a hearing to assess whether a defendant’s condition has changed. If you are charged with an offense that is sexual in nature, it is advisable to confer with an assertive Tampa sex crime defense attorney to determine your options for seeking a favorable result under the circumstances.

A person that is committed against his or her will under the Act has the right to an annual review. Specifically, the Act provides for a limited hearing to evaluate whether there is probable cause to believe that the person’s condition has changed to such a degree that the person no longer poses a threat to society and will not engage in acts of sexual violence if he or she is discharged.

Pursuant to the Act, probable cause is demonstrated when there is adequate evidence produced that would make an ordinarily prudent person harbor a reasonable belief that the condition of the person subject to an involuntary commitment has changed. When a court determines there is a basis to believe the person can be safely released, it will schedule a trial on the issue. The State bears the burden of proving the person’s condition remains unchanged, and therefore, he or she should not be released.

In the subject case, the appellate court found that the trial court erred in determining there was insufficient evidence to establish probable cause. As such, it reversed the trial court ruling and remanded the case for further proceedings.

If you live in Tampa and are currently charged with a sex crime, it is in your best interest to speak to an attorney to discuss what defenses you may be able to assert. William Hanlon of Hanlon Law is a knowledgeable Tampa sex crime defense attorney with ample experience defending people charged with criminal offenses, and if you hire him, he will fight diligently on your behalf. You can reach Mr. Hanlon via the form online or at 813-228-7095 to schedule a meeting.

Does having a local lawyer matter?

Yes. It does matter. Many people feel that a local criminal lawyer will have a deeper relationship with the local prosecutors and local judges. When you’ve spent years practicing within a particular jurisdiction, you earn a certain level of credibility with them. That credibility can play a role in the ultimate resolution of your case.