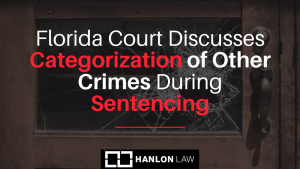 There are numerous factors that the court will weigh in determining what constitutes an appropriate sentence for a person convicted of a crime, including whether the defendant has a prior criminal record or has other criminal charges that are pending. It is critical that a defendant’s other criminal activity be properly classified; however, an improper classification may result in an unjust sentence. This was demonstrated in a recent Florida case in which a defendant’s prior convictions were mischaracterized as additional offenses, resulting in a lengthy prison sentence. If you are accused of committing a criminal offense, it is prudent to speak to a trusted Tampa criminal defense attorney to discuss your options for seeking a just result.

History of the Case

It is reported that the defendant was charged with and convicted of four separate offenses in 2014. He was sentenced to three years in prison followed by a year and a half of probation. At the beginning of his probationary period, the defendant committed new offenses. He was then charged with both violating his probation and with committing the new offenses. Following his sentencing hearing, he filed an appeal, arguing that his scoresheet had errors that required reversal. The appeal was granted, and during his second sentencing hearing, the 2014 crimes were deemed additional offenses, and the 2018 crimes were listed as primary offenses. The defendant then filed a second appeal.

Categorizing Other Criminal Activity for Sentencing

The court explained that, pursuant to Florida case law, when a defendant completes a sentence for a crime, the crime will no longer be considered pending before the court for sentencing and should not be counted as an additional offense. Instead, it should be considered part of the defendant’s prior record.

Under the guidance of existing case law, the appellate court found that the trial court erred in listing the defendant’s 2014 convictions as additional offenses during his resentencing hearing. Specifically, as the defendant completed the sentence for those crimes prior to the 2018 hearing, they were no longer pending before the court. As such, the court reversed the defendant’s sentence and remanded for resentencing.

Meet with a Trusted Tampa Attorney

While a person’s past criminal activity may be considered during the sentence, if prior crimes are inaccurately assessed, it may result in a violation of rights. If you are accused of a crime, it is important to speak to an attorney regarding what evidence the State may introduce against you throughout the process. William Hanlon of Hanlon Law is a trusted Tampa criminal defense attorney who can advise you of your rights and help you fight to seek the best outcome available under the facts of your case. Mr. Hanlon can be contacted via the online form or at 813-228-7095 to schedule a meeting.

Have I been charged with a crime if a police office has arrested me?

Does it help me to be cooperative with the police?

No. If you’re the suspect in an investigation, nothing you offer to law enforcement is ultimately going to help your case or prevent you from getting formally charged. It can only hurt you. Before speaking to the police, it is always important to consult with an experienced criminal attorney. Many times what you tell the police officer does not end up in his report. You should remember that every law enforcement officer has an agenda, and what actually ends up in their report is often an interpretation of what you tell them. Many times that interpretation is used by the law enforcement officer to support their decision to arrest you.